What do profitable farms do? This is one of the questions the Canadian Cow-Calf Cost of Production Network (COP Network) tries to answer by benchmarking cow-calf production systems across Canada.

As of 2022, the COP Network is comprised of 46 benchmark cow-calf farms and three dairy-beef farms, with data collected from 186 participants across Canada. Farms within the COP Network represent a variety of Canadian production systems, including variation in animal performance, economies of scale, labour productivity, feeding and farm financials.

Based on data from these benchmark farms for the 2021 production year, it is observed that the higher profit farms within the Network tend to have more cows, smaller cows and lower costs per cow. The following analysis looks at the cow-calf enterprise alone and results do vary at the whole-farm level when other enterprises are considered.

The 2021 results indicated that farms with a larger herd were more likely to cover their cash and depreciation costs.

The major driving factor behind this pattern was the economies of scale, as larger herd operations were able to spread overhead costs over more cows.

Percentage of Benchmark Farms that Covered Cash and Depreciation Costs in 2021, by Herd Size

The lower percentage covering cash costs and depreciation in the >300 group at 75%, compared to the 201-300 head group at 89% was due to some of the farms being hit harder by drought conditions in 2021 and dealing with sharper increases in feed costs (i.e., with a lack of surplus feedstocks and/or other enterprises that used feed). 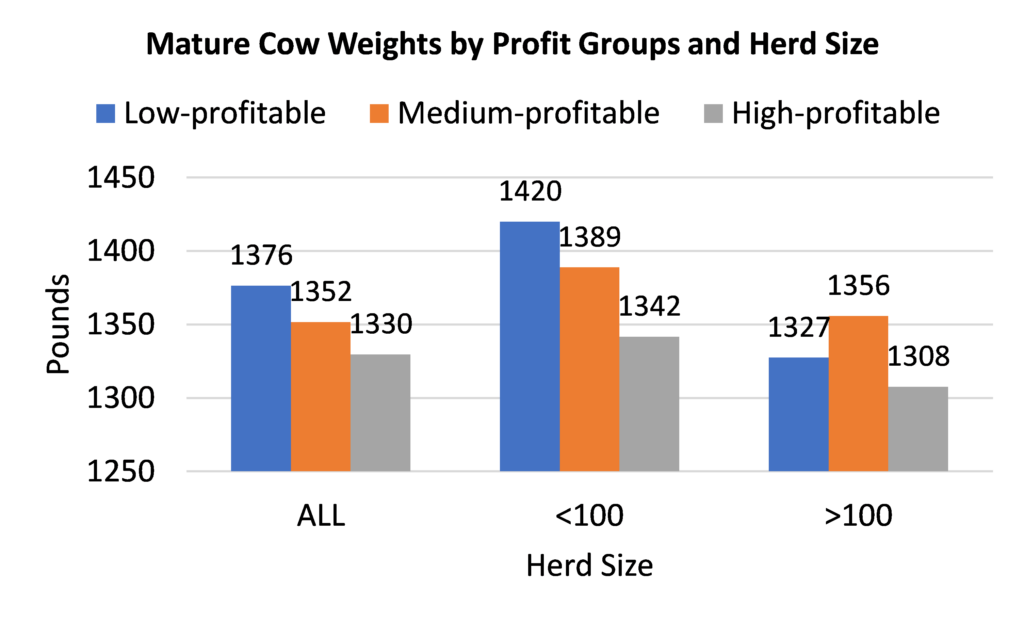 The lower costs of maintaining smaller cows appeared to offset the lower revenue on lighter calves and had positive impacts on profitability. This may be particularly true for the drought-affected farms in 2021 given the skyrocketed feed prices and relatively stable cattle prices.

Looking at cost structure, average depreciation and cash costs dropped 48% and 30%, respectively from the low- to high-profitable group. Opportunity costs were an exception with a 35% increase from the medium to high profitable group. This was driven by higher (+14%) unpaid labour hours per cow, higher (+13%) wages for the unpaid labour, as well as higher (+16%) estimated rental price for owned land.

A driver behind the lower feed costs was the cost of feed production. As most of the COP Network farms used homegrown feed, with only a few relying on purchased feed, lower average feed costs were mostly associated with the costs of producing feed on the operation. On average, the combined costs of purchased feed, fertilizer, seed and other variable inputs dropped more than 30% from the low to high profitable group. Land costs were relatively stable across the three groups while labour and capital costs declined by around 40% from the low to high profitable group.

As the COP Network shed light on some of the commonalities of the profitable farms, the results showed that profitability did not relate to a specific production system, farm structure or region. Each operation had its own unique approach to achieve financial success.

The COP Network offers a unique opportunity for continuous learning. Participating producers can benefit throughout the process – from the collection and understanding of your own data, to taking part in virtual focus groups and learning from other producers, to exploring potential practice changes in the future.

Foot Problems in the Feedlot

What we know about buller steer syndrome in feedlot steers